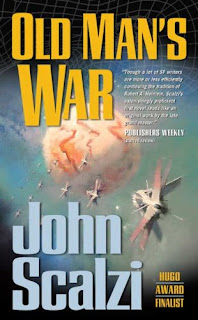 I've had a bit of a backlog of books to review for a while, so I thought that while I read The Way of Kings (which is fantastic so far, but I'm trying not to read it too fast, and it's really long), I'd get through some of them. The first of these showcases a negligible hole in my reading: Sci-Fi. I love the genre on film, as well as the pseudo-sci-fi movies like STAR WARS, but in book form, I've read hardly any of it. I've read most of Orson Scott Card's Ender and Bean books at some time or another, with the exceptions of the most recent volumes. I've read some Asimov. A fair bit of Bradbury. A smidgen of Peter F. Hamilton, but not enough to formulate my opinions on the author. And that's it, for my entire life.
I've heard for years about the famous/infamous John Scalzi, especially in regards to his Whatever blog. However, one thing wasn't really disputed: he was a good writer. So I decided to pick up a copy of his debut, and dive in, after going years without reading a full sci-fi book.
It was awesome.
Old Man's War tells the story of John Perry, a 75-year-old man who, since his wife is dead, takes the most sensible course of action. He joins the army. Don't worry, this is centuries into the future, and this is how all wars are fought. The soldiers are given new bodies, shipped out to planets to win them over for human inhabitants, and never look back. By never look back, I mean there's a contract saying they'll never return to Earth. Which maks sense, bacause Perry's new body is green.
This book is full of fun touches and interesting details that serve to remind me that sci-fi needs worldbuilding, too. The characters, first person narrator John Perry especially, are dynamic and compelling from the start. I know it's been said before, but this is the closest thing I can think of to Stephen King writing in this genre. It's all about the characters, and the conversational style of the prose makes the pages fly. The book isn't too long either, unlike some Orson Scott Card books became (I'm looking at you, Xenocide!).
There are a number of scenes that stick in your head long after the reading. John first getting his new body, recognizing a member of the Ghost Brigades, and fighting an extremely aggressive yet tiny species of alien come to mind instantly. I cannot recommend it enough, even if sci-fi isn't your thing. You'll have fun, and the book won't take too long to read.
After getting through it, I can say with some certainty that I'll return to the genre soon. I'll definitely return to John Scalzi soon. A great, fun ride.
My rating: 9/10
Coming Soon: The Way of Kings and more backlog books!
Posted by The Writer at 8:07 AM