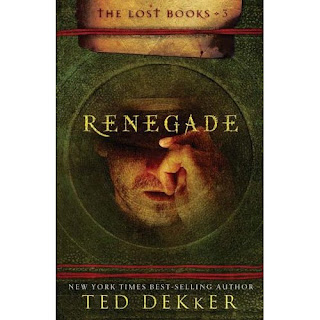 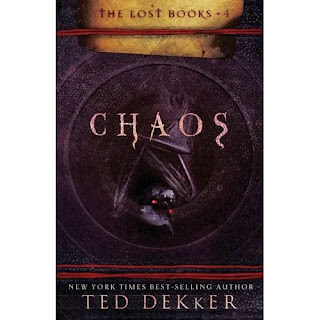 So, here we have it. The last two books published in a 4-book series (and all published this year) by Ted Dekker. The first two books, Chosen and Infidel, answered some questions and begged the asking of some new ones. But with the publication of these two books, the penultimate volumes in Dekker's massive, genre-redefining, Books of History/Project Showdown series, readers finally begin to get a sense of what it's all about-- and it's not what we thought.

Renegade starts at the precise moment when Infidel ends. Billos has done what he should never have done. He has entered the cover of one of the seven missing Books of History, taking the other two that the Chosen have found so far with him. This understandibly hits Darsal hard, seeing as Billos is the man she loves. So she sets out into the desert to find a way to reach him, with the young once-Scab Karas in pursuit. There, they must strike a dangerous bargain that could jeopardize their quest...

Meanwhile, Billos finds himself in Paradise, Colorado. He is in a lair of some kind, filled with worms. There he meets a man named Marsuvees Black, who has a plan he's about to set in motion...

Johnis and Silvie chase after them, knowing this may be a battle they cannot win. Their journey will take them to the ends of their world...

Think about all of those questions you wanted answered. What's the purpose of getting all seven missing Books together? What is Alucard's secret plan? What are Red and White, really? What are the worms? They'll be answered, plus more, in true Ted Dekker style. And I'm beginning to think his style's improving. 2008 is a good year for Dekker, these being the fourth and fifth books he's published so far in it. And Sinner's on the way.

Beware reader, though, for a betrayal lies ahead.
Posted by The Writer at 3:53 PM No comments: 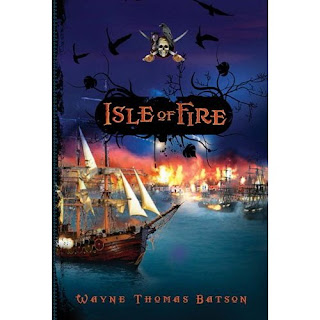 The Keys to the Kingdom-- Superior Saturday: Garth Nix is back with the sixth explosive title in his gripping fantasy series, The Keys to the Kingdom. On the Sixth Day, there was Sorcery Arthur Penhaligon has wrested five of the Keys from their immortal guardians, the Trustees of the Will. But gaining the Sixth Key poses a greater challenge than any he has ever faced before. Superior Saturday is not just one of the Trustees, she is also the oldest Denizen and the most powerful and knowledgeable sorcerer within the House. She has tens of thousands of sorcerers at her command -- and she has been preparing her forces all along for the Will's escape and the activities of the Rightful Heir. Everything is all just part of a greater plan she has been hatching for ten thousand years. As Saturday's schemes become evident, Arthur is beset on all sides. Nothing is eroding the House, and only the power of the Keys can hold back the tide of destruction. His mother is still missing. His home city is under attack. His allies are unreliable.He can't even get into the apparently impregnable Upper House and even if he does, finding the Sixth Part of the Will and gaining the Sixth Key might not be enough to counter Saturday's sorcerous hordes or stop her bid for ultimate power. Out July 1.

The Books of Ember-- The Diamond of Darkhold: It’s been several months since Lina and Doon escaped the dying city of Ember and, along with the rest of their people, joined the town of Sparks. Now, struggling through the harsh winter aboveground, they find an unusual book. Torn up and missing most of its pages, it alludes to a mysterious device from before the Disaster, which they believe is still in Ember. Together, Lina and Doon must go back underground to retrieve what was lost and bring light to a dark world. Out August 26.


Charlie Bone and the Shadow: The enchanter Count Harken is back to take his revenge on the Red King's heirs, starting with Charlie Bone's family! Charlie's ancestor has been kidnapped and imprisoned in the dark, forbidding land of Badlock, and it's up to Charlie to save him. Traveling through a painting to the terrifying countryside, Charlie and his best friend's dog, Runner Bean, take up the quest. But when Runner Bean gets trapped, Charlie needs the help of his friends. Can they get past an army of trolls, rescue Runner Bean and Charlie's ancestor, and get out before it's too late? Can Charlie outwit Court Harken and his sinister troops, or will the prisoners be doomed to being held captive in Badlock forever? Out September 1.


Isle of Fire: The spell-binding adventure continues as Captain Ross and his crew become pirate hunters for the British Government and Cat captains his own ship.
This intriguing, action-packed adventure will keep intermediate readers eagerly turning pages to find out if . . .
-There is a way to overcome the Vikings' powerful weapon on the Rain of Fire
-England's greedy king will betray the pirate-hunters and keep the monks' treasure for himself
-The ruthless pirate Bartholomew Thorn is still alive
-A evil Merchant finds a person continue his malevolent ways
-Cat regains his memory and will profess his faith or join the Merchant's crusade
-Anne escapes the Merchant's Lair


The Chronicles of the Imaginarium Geographica-- The Indigo King: Out October 21.


PENDRAGON: Before the War-- The Travelers: Before Bobby Pendragon.Before Saint Dane. Before the war... Every territory of Halla has a Traveler. They lived for years -- some even for decades -- before learning of their true destiny. What was life like for Bobby Pendragon's fellow Travelers before they joined him in the fight to save every time and place that has ever existed? What led up to their becoming the guardians of Halla? The answers are here! In this first of three thrilling Pendragon prequels, read about Vo Spader's death-defying adventures in the underwater world of Cloral, Gunny Van Dyke's race to find a murderer in 1930's Manhattan on First Earth, and the tough challenges Kasha faced on Eelong well before Bobby Pendragon arrived... Out November 25.
Posted by The Writer at 6:05 PM 1 comment: 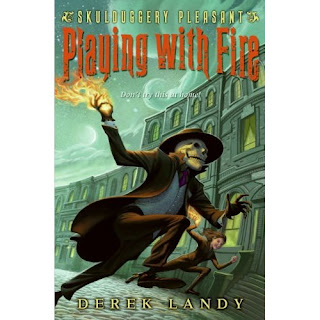 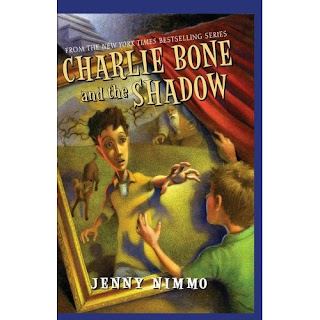 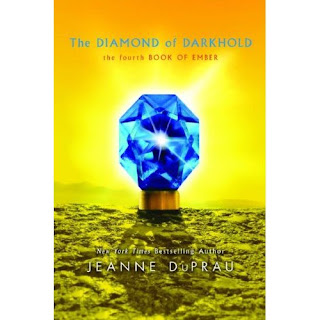 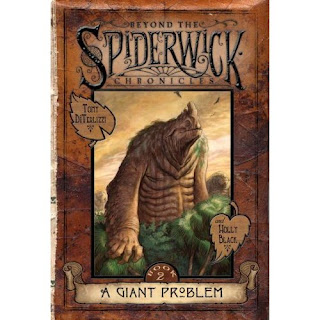 Posted by The Writer at 5:56 PM No comments: 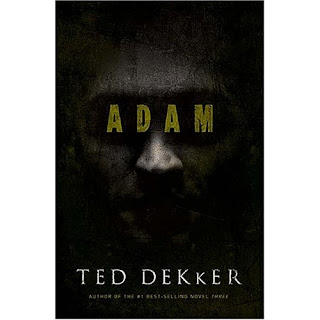 I found Ted Dekker's latest book slightly before it was supposed to come out. I waited a while before reviewing it just to let myself settle down. You see, I read this one in about a day, and boy, was it an interesting day. I've waited a while to say this, because I wanted to reflect and make sure it was true:

It takes an obsessive mind to know one. And Daniel Clark knows the elusive killer he's been stalking.

He's devoted every waking minute as a profiler to find the serial killer known only as Eve. He's pored over the crime scenes of sixteen young women who died mysterious deaths, all in underground basements or caverns. He's delved into the killer's head and puzzled over the twisted religious overtones of the killings.

What Daniel can't possibly know is that he will be Eve's next victim. He will be the killer's first Adam. After sixteen hopeless months, the case takes a drastic turn on a very dark night when Daniel is shot and left for dead.

Resuscitated after twenty minutes of clinical death, Daniel finds himself haunted by the experience. He knows he's seen the killer's face, but the trauma of dying has obscured the memory and left him with crushing panic attacks. Nothing--not even desperate, dangerous attempts to reexperience his own death--seems to bring him closer to finding the killer.

Then Eve strikes again, much closer to home. And Daniel's obsession explodes into a battle for his life . . . his sanity . . . his very soul.

Adam is perhaps the most gripping and gritty Ted Dekker's writing gets. Daniel Clark's deadly adventures will keep you riveted from start to finish. The case study of the Eve killer, told in nine magazine excerpts throughout the book, is always captivating.

But be careful... this one could be the most real, and therefore terrifying thriller you read this year.
Posted by The Writer at 4:02 PM No comments:

Is it pretty...or pretty creepy? 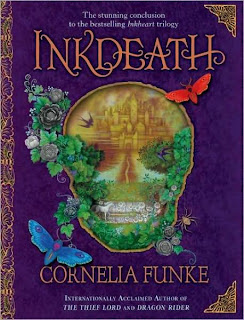 The Makings of an Epic... 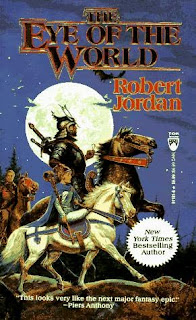 Yes, it's been a while since I last posted, I know. But I was busy. And a bunch of other websites and blogs were updated, and this blog isn't nearly as important, anyway.

Anyway, today's post is about some epic fantasies. And I'm writing this knowing it will rub some people in the wrong way. So, my apologies in advance.

Well, you were warned.

The Wheel of Time: Now, I'm a bit late reading this series by Robert Jordan, and I've only read the first one so far, but I've done a bit of research, and from reading the massive book 1, The Eye of the World, I've got an idea as to what this series could be like. Beware-- Don't go into this expecting a light read. There's a lot of world in this series, and Jordan delights in showing it to us. If you like the little details, this series will be the perfect fit for you. If you want every page of the book to be filled with action... go read Alex Rider instead. This is, as I understand it, the beginning of a 12-book epic, each of the books about the same length as this one (700-800 pages each). In otherwords, this series is not for the faint of the heart for the simple reason of length. However, it will provide you with many (many) nights of cozy fireside reading, if you let it. On a side note, I've seen that the author has just died, but there's another author who's already started work on book 12, due to be released sometime next year. Fans, don't worry. Jordan left detailed notes.

A Song of Ice and Fire: I've also just started reading this 7-book series by George R. R. Martin (that's right, another "R. R." fantasy author), and it's also enjoyable. But definately not The Wheel of Time. Now, that's not necessarily a bad thing. It's a bit of a welcome change from the norm. In some ways, it's almost an "anti-fantasy". Don't worry, there are still dragons. And castles. And swords. And it still demands a lot of your time.

The Inheritance Cycle: For some, this name is almost sacred. For some, it's blasphemy. One of the most fervently loved/hated fantasy series of late, Christopher Paolini's 4-book, dragon-centered, epic. Eragon, for whom the first book is named, has quite a lot of adventures for a teenage farmboy, as can be seen in the less-than-successful 2006 film. Though some parts of the books seem like a glorified homage to Tolkien and McCaffrey, they read well, and you might as well give it a try.
Posted by The Writer at 3:23 PM No comments: