I just received this award from Melissa over at My World. It's a great blog, and I'm honored to receive this. Thanks, Melissa!

Blogs I'm giving it to:

Coming Soon: Bran Hambric-- The Farfield Curse and the start of a new set of reviews.
Posted by The Writer at 5:50 AM 2 comments:

A Door in the Woods and Skulduggery Pleasant 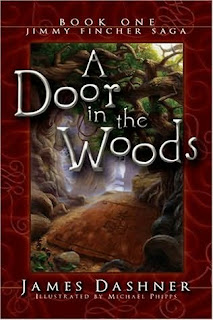 A Door in the Woods: Fresh off having read The 13th Reality-- The Hunt for Dark Infinity, I realized James Dashner has a four book series (finished) that I hadn't read. It was called the Jimmy Fincher Saga, and within its thin binding, it promised to tell a big story. There's no way I would even consider leaving a Dashner book on the shelves now, so I bought it upon sight. While this might not have been the case if it still had its first cover, I walked out of the store with a beautiful book tucked under my arm.

Woods tells the story of a young man from Georgia named-- you guessed it, you're so smart-- Jimmy Fincher. He goes into the woods near his house to climb a tree, but in the tree, he sees something that will change his life forever. I'm not going to spoil the surprise of that the thing is, but I will say it's very impressive and dangerous, and it hints of something really huge. Jimmy finds himself whisked on a nonstop adventure around the country and beyond as he tries to put together the puzzle he is now in. But who can he trust? And what is the secret of the old wooden door in the middle of the woods near his home that no one can open? The answer: I can't tell you that, but it's world-changing.

Dashner, as always, has a great sense of humor that combines with huge discoveries to make a gripping book. You really root for Jimmy as he almost stumbles through his adventure. But this book tells the amount of story that's in one of his 13th Reality books in only half the space. There's no stopping this tale, but there's no room to breathe, either. The relentless pace of the book, while it kept me reading until I was done, was a little overwhelming at times. Yes, that's right, I found a 175-page book a little overwhelming. That's kinda sad, I know. That said, I had a fun time reading about Mr. Fincher, and I hope to join him soon in Book 2: A Gift of Ice. 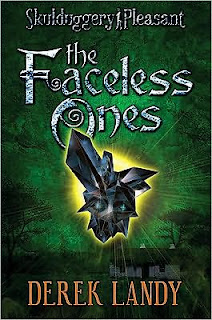 The Skulduggery Pleasant Series: In all the time I've had this blog, I haven't mentioned the Skulduggery Pleasant books. Which is really a shame, because I've enjoyed every minute I've spent reading them. They haven't quite caught on in the US like they have in the UK, but they're one of my answers to the question of what to read after Harry Potter.
Scepter of the Ancients: When 12-year-old Stephanie's eccentric Uncle Gordon dies, a mysterious man bundled in an overcoat, scarf, sunglasses, and a hat shows up at both the funeral and the reading of the will. This man, as it turns out, is Skulduggery Pleasant, a walking, talking skeleton who rescues Stephanie when she is attacked while alone in the house that she has just inherited. It seems that a particularly evil person named Serpine is trying to obtain a scepter that will allow him to rule the world. Stephanie is swept into a world of magic, secrets, power, and intrigue as she and Skulduggery try to keep one step ahead of Serpine and various other nefarious folk. Deadly hand-to-hand combat, nasty villains, magical derring-do, and traitorous allies will keep readers turning the pages, but it is the dynamic duo of Stephanie and Skulduggery who provide the real magic. The girl eagerly jumps into this new, dangerous, action-packed life, but she isn't sure that she has the guts or the power to pull it off.
My rating: 9/10
Playing with Fire: 13-year-old Valkyrie Cain and her mentor, the living skeleton detective, are faced with the return of the evil Baron Vengeous, who has been freed from prison. Vengeous is trying to reanimate the Grotesquery, a monster made up of pieces of a variety of evil creatures. If his scheme is successful, the Faceless Ones, "the terrible dark gods, exiled from this world," will return. Faced with treachery within the ranks of good magicians, Valkyrie and Skulduggery must rely on their own Elemental magical powers and a few trusted allies to confront Vengeous's magic and helpers, such as the vampire Dusk and Billy-Ray Sanguine, who has the ability to tunnel underground. One magical action sequence follows another as Valkyrie must find the courage to face what seem to be insurmountable foes.
My rating: 8.5/10
The Faceless Ones: If you've read the other Skulduggery books by Derek Landy (and you really should have read them by now), you've seen it all before: Some bad guy wants to bring about the end of the world, and Skulduggery and Valkyrie fight valiantly to stop it from happening. A few people get hurt, sure, but everything's all right in the end. Well, not this time.
My rating: 9.5/10
Some things I like about the series: Skulduggery and Valkyrie have a great back-and-forth, and all of the dialogue in these books is snappy and energized. The action scenes are handled well, and, as the third book's synopsis suggests, the characters don't live in a perfect, harmless world like a certain boy wizard I know seemed to in the early books of his series. It's a great ride that it's impossible not to love. I read them all in a day each. You probably will, too. I can't wait for Book 4.
Coming Soon: Bran Hambric-- The Farfield Curse.
Posted by The Writer at 8:26 AM 5 comments: 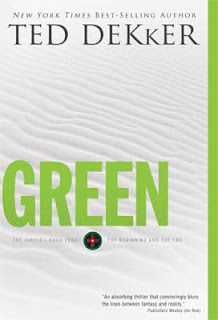 Green: Ted Dekker has been leading me on a confusing journey for the past two years. It began (or did it end?) with a man walking outside a Denver coffee shop and discovering he is being shot at. Fourteen books-- some of them seemingly unrelated-- later, it ends (or does it begin?) with Green. Book Zero of the Circle Series, and more importantly, the Books of History Chronicles.
There will probably be some spoilers, but I can't really avoid them here. If you're not wanting the rest of the Books of History Chronicles to have anything revealed to you, then skip down to the paragraph after next.
Thomas Hunter (or is it Thomas of Hunter?) has lived ten years in the future Earth with his wife, Chelise, and his children. For ten years the Circle has evaded the diseased Horde, and for ten years its numbers have been growing. But Elyon has not appeared since the events of White, and the Circle begins to doubt his teachings. Thomas' son, Samuel, has decided the time has come for the peaceful Circle to take up the legacy of the Forest Guard again. At the same time, one of Teeleh's dark priests, Ba'al, who serves the Shataiki queen Marsuuv, is seeking objects of power that the Horde leader Qurong has hidden. It becomes apparent that the only way for Thomas to save his home is by returning to his first home-- the here and now. There, he hopes to find something left there that will stop the death of everyone he loves. But an all-too-familiar evil is waiting...
Dekker has it all, and he delivers a killer finale. He pulls out the stops, is not afraid to kill major characters, and shocking revelations abound. It's a truly pulse-pounding ride to the finish line, and I can finally say the Circle is complete. A job well done.
My rating: 10/10 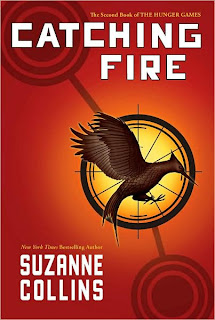 Catching Fire (Book 2 of the Hunger Games): Katniss has spent the past year living with her family, Peeta, and Haymitch in the Victors' Village after having survived the Hunger Games. But all is not well. She learns upon a visit from President Snow, the man who rules over all of Panem, that her job is not done. She has unintentionally become the face of a countrywide rebellious spirit that threatens to explode at any moment. Her life, Peeta's life, Gale's life, and her family's life are at stake if she doesn't do everything as the President says. But Panem may crumble on its own, and Katniss and everyone she cares about must uncover the mysteries the Capitol is trying to cover up. If they make one false move, they will all die. And then, President Snow reveals a plan to ensure that no one is safe...
This was an amazing book from Suzanne Collins, perhaps her best book to date. It is an amazing tour-de-force of action, suspense, romance, terror, and hope in desperate times that is guranteed to both keep the reader up late at night reading it and keep them thinking about it long afterwards. I cannot praise Collins enough for this series, but don't worry, I'll try again when Book 3 comes out. She has a knack for truly making you care about the people who populate her books, and she does with a modest word count what some people spend a thousand pages trying to create: emotion from the reader. Wow.

Coming Soon: A Door in the Woods.
Posted by The Writer at 2:27 PM 4 comments: