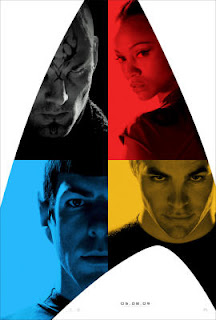 Okay, first of all, I'm not a Trekkie in any sense of the word. I've never even seen a whole TV episode of the series. I've seen the original 6 movies a couple of times, tops. So I know very little of the mythology behind Star Trek, J. J. Abrams' latest fims (only his second!). But I saw it with some Trekkies, and they enjoyed a bunch of clever nods to the series. I enjoyed it, too.

I'm not going to reveal the plot, because I really, REALLY hate it when people spoil movies for me. I can't even talk about the best parts, because they, too, tie into the movie's plot. I'll just say that the story is smart, fast, and compelling. The acting is top notch. The actors fill the shoes of their predecessors nicely, giving the spirit of those who came before without giving the exact performance of them. The special effects are breathtaking. The music is superb. And the action will knock your socks off.

The end of the film makes you want a sequel, and one is coming, hopefully by 2011. Just go see it. You WILL enjoy it. Boldly see what millions of other people are seeing, because they're right. It's one of the year's best movies. 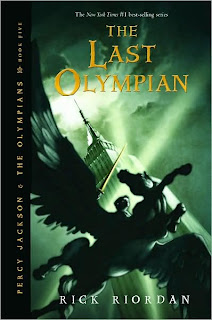 I've now read Rick Riordan's series to the end. I discovered it not long after it came out, so I've been following it for about four years. Percy Jackson and the Olympians has become many people's answer for what to read after Harry Potter. They really share no similarities, save for the strength of the writing and the creativity of the story. So now, the final chapter: The Last Olympian.

Perseus "Percy" Jackson is about to turn sixteen, and the prophecy about him is on the cusp of becoming true. As he writes, "The end of the world started when a pegasus landed on the hood of my car." Did I mention I love the writing here? Percy is on a vacation with Rachel Elizabeth Dare (for those of you who've read Duma Key, she's RED), and she seems to have a huge crush on him. Percy's torn between two well-fleshed-out girls, but he really doesn't have time to concentrate. After all, he's got to save the world -- and Olympus -- in a mere 400 pages.
From here, the book whizzes along, leaving readers no time to catch their breath. The pages fly as if they were on the back of Blackjack the pegasus. Revelations abound. We see more of Luke's past, as well as Annabeth's. We find out what may be the only hope for the world. And yes, we find out who the Last Olympian really is.
Rick Riordan has a great talent for writing books that appeal to everyone, and Percy Jackson strikes a chord with everyone in at least one place. Characters die or endure horrible tragedy. Prophecies are made and fulfilled. The Oracle gets a replacement. And the demigods make a last stand that leaves no one untouched.
It's a worthy end to a fantastic series. And the best part? Riordan says there will be more.
My rating: 10/10.
Series rating: 10/10.
Coming Soon: Star Trek review.
Posted by The Writer at 9:02 AM 1 comment: