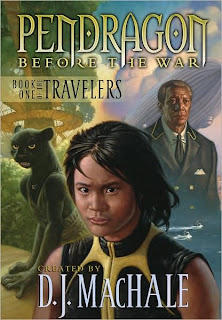 First of all, this book is a toughie to name. It's officially listed as PENDRAGON: Before the War-- The Travelers Book One, but that's a really, really, REALLY stupid title. So in this review, I'll just call it Prequel 1. It makes things easier. It's the first of three Travelers books, and just came out this week. Now it's only 250 pages long, so it didn't take long to read.

Prequel 1 shows a glimpse of Halla before the events of the PENDRAGON series, before Uncle Press took Bobby Pendragon on that fateful motorcycle ride the day of Bobby's big basketball game (try saying that three times fast). In fact, it's the only book in the series where the protagonist and title character is absent.

Kasha, a klee from Eelong, is on the brink of finging her plade in the world. She's good at her job, and a talented player on the Wippen court. But she is challenged to see things a different way after a gar named Press talks to her father and tells him of something greater than himself. What if the gars really do have feelings? Will she bring her team down in her attempts to make wippen easier for the gars?

Gunny Van Dyke, who works at a hotel in First Earth Manhatten, has just become a part of something dangerous. A friend of his was gunned down, and another friend is being accused of committing the murder. Now Gunny has to watch over the deceased friend's teenage son, as well as find out who really killed his friend. He just has to hope the search doesn't kill him.

Vo Spader, who just graduated from the aquaneer academy on Cloral, has gotten a choice assignment: working on the ship Grallion. But there are some problems. First, he has to work alongside a rival student in his new job. And those conflicts are hurting him in his job. Worse still, Grallion gets attacked by raiders, and he and his rival are the only ones left. Talk about a tum-tigger!

Prequel 1 wasn't actually written by D. J. MacHale, for he is still hard at work making sure The Soldiers of Halla is ready for release on May 12. Each prequel was written by a different author-- this one's was Carla Jablonsky, who I've never heard of or read anything by before. But she does a very good job of channeling MacHale, keeping the style consistent, adding to the world while carefully making sure that characters act as they should. Prequel 1 was a pleasure to read, and I'm looking forward to the release of Prequel 2, set to come out late February. 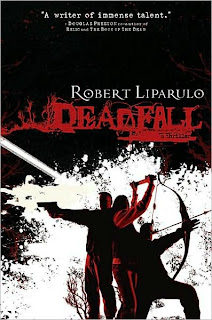 Robert Liparulo is one of those writers I wish I'd found a long time ago. But I'm getting closer to being caught up on his works. I've only got two published ones left: Deadfall and Comes a Horseman, his debut novel. Now, the Barnes & Noble I went to only had the former of these titles, so I've gotten to read it first. Here we go:
Deadfall is the story of John Hutchinson, known to his friends as Hutch. Hutch and his friends decide to go camping up in the beautiful Canadian wilderness after a long year of troubles: divorce, depression, job loss, etc. They're going to spent their 10 days hunting and living on the land (easier than you might think, since cell phones don't work up there). No distractions.
That is, until Hutch is attacked by a group of people in a yellow Hummer who are testing the ultimate weapon-- which I'm not going to tell you about, since its full implications are something the reader needs to uncover. All I'll say is that it lends itself to some truly explosive scenes.
Hutch and his friends run for the nearby town of Fiddler Falls for safety, but there they find that the townspeople are being kept hostage. Some have already been killed. So now it's up to Hutch and co. to rely on their survival skills to liberate Fiddler Falls without becoming just a smudge on the map.
Liparulo's writing is great, with realistic characters and dialogue set in intense and surreal conditions, and it makes the nearly-500-page-long book go by in a heartbeat (Well, okay, several heartbeats. By the end, your heart is beating pretty fast.) He can be welcomed into the highest company of suspense writers, alongside Ted Dekker and Frank Peretti. I loved it!
On and there's a sequel coming out in March. It's called Deadlock. I can't wait. I guess I'll find a way to wait somehow (*cough* Comes a Horseman *cough*).
My rating: 9.5/10
Posted by The Writer at 1:56 PM 1 comment:

When I was at my local bookstore, I perused the clearance section and found a couple of hardbacks for $4 each. Needless to say, this was a deal too good to pass up. So I bought them. The Black Tattoo by Sam Enthoven and Monster Blood Tattoo: Foundling by D.M. Cornish will now be reviewed right here, so you can see which Tattoo to get (no pun intended). 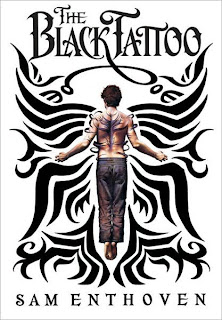 The Black Tattoo: Jack knows his friend Charlie is the embodiment of cool, even though he's going through some tough times (his dad's having an affair). So when Charlie gets a moving black tattoo on his back, causing him and Jack to be recruited into a secret organization whose goal is to fight the demon Scourge, he's just all the cooler. Especially since the tattoo gives him magical powers and the ability to do kung-fu like a master. But the tattoo seems to have a darker side, so he, Jack, and the members of the Brotherhood must find a way to stop the Scourge from bringing Hell on earth-- literally.
Now I have to hand it to Sam Enthoven. For a first-time author, he's got a lot of creativity, and the writing is brisk, fun, and easy to get sucked into. But the book just got a little, well, odd, for my taste, and I'm not entirely sure I'd read a sequel if there was one. It was worth reading once, and it was worth the $4 I spent on it.
My rating: 6/10 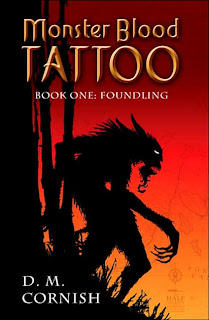 Monster Blood Tattoo: Foundling: The first in a massive trilogy, Foundling plunges readers right into the Half-Continent, a world just out of reach from our own, a world filled with interesting characters and escapades. Cornish started fleshing out his world in 1993, so the idea's about 16 years old now (give or take a few months). And it's good. The story starts with Rossamund, a boy with a girl's name, who is finally about to leave Madam Opera's, the foundlingery where he's lived all his life. He's been told that being a vinegaroon is the perfect occupation, but instead he gets chosen to be a Lamplighter. However, the journey to even start his new career is beyond difficult, and he meets bizarre and captivating characters along the way, such as Europe and the villainous Poundinch.
A telltale sign of how big the world is can be found in the 100+ page long Explicarium in the back of the book, which also contains eight pages of maps. The Half-Continent is HUGE, and we've only just started to explore it. And, thanks to Cornish's excellent writing, that's a good thing.

Oh, and don't forget to wear your hat.