"Phantom of the Opera" review 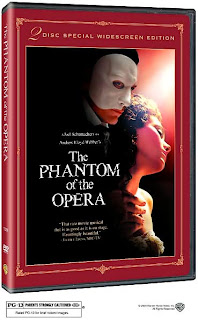 The film is a romance-- a love triangle, a swashbuckling action film, a musical whose songs soar to new heights of the imagination, and a thriller all rolled into one package. And it doesn't disappoint. The sets are lavish, the costumes are lavish, the singing is lavish, and it can't get much better than this.

There are many out there who have seen the stage musical in countries all around the world, and the plot isn't exactly a secret: a Phantom (Gerard Butler) lurks inside a Parisian opera house, where he finds a girl named Christine Daae (Emily Rossum) with great singing talents. He soon falls in love with her, becomes obsessed with her, and takes her down to his layer. He seduces her, sends her back, and pulls some strings at the theatre to ensure she gets the lead. About this time Christine's childhood sweetheart, Raoul (Patrick Wilson), appears and falls in love with Christine again. The Phantom turns murderous, and both he and Raoul begin vying for Ms. Daae's affections.

The acting is pitch perfect. Gerard Butler establishes firmly an inner torment that balances sympathy and fear in our minds. Patrick Wilson is not too good-looking to be real, and his singing is bewitching. But Emily Rossum's performance is truly the one that makes the heart soar, her vocals masterfully beautiful in every scene, and she steals the show, almost, from the Phantom himself.

The songs are as wonderful as ever. "Music of the Night" is lush and floating, "Point of No Return" is tense and gripping, "All I Ask of You" is sweet, lifting, and romantic, and the title tune is sung to an extent seldom matched in a musical.

The movie's on DVD now, and everyone should surrender to its darkly cast spell.
Posted by The Writer at 3:31 PM 2 comments: 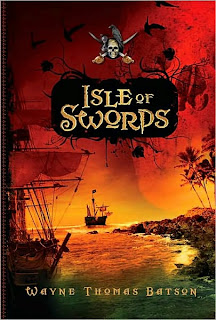 Wayne Thomas Batson unleashed his first non-Door Within book upon an unsuspecting populace this September. It's a move away from his original style of fantasy. It's Isle of Swords. It's about those OTHER pirates of the Caribbean, and it's Batson's best yet.

The book opens with Captain Declan Ross, an honest pirate. He doesn't hurt those he steals from, he's got a system of honor, and his crew looks up to him. His daughter wishes to be an official crew member, but he won't have it. Trouble is, they're low on loot, and there's a leak in his ship that will cause it to sink... in a week.
So they go to an island, where they find a boy, brutally injured, with no clue of who he is. Declan Ross and his men take him aboard, where they name him Cat. Eventually, they sail to an island with some monks who know the secret of a treasure. The treasure is located on the Isle of Swords, which is, of course, not on any written maps.
But there's a catch: Bartholomew Thorne, the most ruthless pirate on the sea, is after the treasure too.
This book is perhaps the grittiest and most intense of Batson's work, and in my opinion better than the Disney movies. They're a departure from the traditional Hollywood pirates, and more real and compelling as a result.
Hey, it beats the Disney ride, too.
Posted by The Writer at 2:06 PM 2 comments: