I Am Not A Serial Killer

We're going to start off the proceedings with an entirely new author! His name's Dan Wells, and writing about creepy guys is his specialty. He's only got two books published as of now, the first two books in a trilogy, and I've had the priviledge of reading them both. Here's the thing: Dan Wells is one of the most promising new writers I've read in recent memory, and I Am Not A Serial Killer is a real genre-defying delight.
John Wayne Cleaver is something of a troubled teen. By "troubled" here I mean of course that he has all the indications of growing up to be... well, you know. Even though he's a sociopath, he really doesn't want that. So he studies up on famous serial killers to give him an idea of what not to do.
But there are some issues. Like the fact that his family owns a morgue. And the fact that some murder victims are arriving, looking to be more and more like the work of a serial killer. So John's faced with a smidgen of a problem-- finding and stopping the killer without anyone else knowing... or without succumbing to the temptations of blood himself.
It's impossible to classify a book like I Am Not A Serial Killer. It involves a teenage protagonist, but it's a bit too gruesome to be classified as YA. And there are some twists which make it hard to place in any specific genre at all. But that's okay, Dan Wells's book isn't any worse because of it. This is a truly original work (although comparisons to Dexter will inevitably be made, it's way too much of a stretch) with a chillingly complex narrator.
More about that narrator. John Wayne Cleaver's voice is what guides us through the book, and Dan Wells has absolutely nailed it. He's nailed it so well that I'm almost worried about his state of mental health. John is both a teenager and a sociopath, a paradox when it comes to emotions, something which in the hands of a lesser writer would only lead to disaster. But Dan Wells is Not A Lesser Writer. John is a protagonist you will in turn root for and be unnerved by, a diamond in the very, very rough. It's what had me coming back for more in the sequel, Mr. Monster.
In short, I Am Not A Serial Killer is Not An Average Book. The characters are fascinating, the plot page-turning, and the attention to detail on the part of the author unnerving. In short, I recommend it highly.
My rating: 9.5/10
Coming Soon: Mr. Monster and Harry Potter and the Deathly Hallows Part I
Posted by The Writer at 7:55 PM No comments:

I'd like to start off by saying I'm terribly sorry about the lengthy hiatus from the blog. I've been extremely busy, and I've hardly had time to get to a computer. This is perhaps the longest I've ever gone without a post, and for a brief period of time, I was contemplating not coming back. After all, Speculative Horizons just recently bid farewell, and since I reviewed such a good book for Classic of the Month, I considered just leaving it at that.
But I couldn't let it sit anymore. And I'm not going to let it sit anymore. The Writer's Notebook is coming back up, starting now, and I've got some really explosive reads for you now! New authors, new books from old authors, and a new look! I appreciate any and all of you who actually read what I write, and I look forward to continuing this journey. 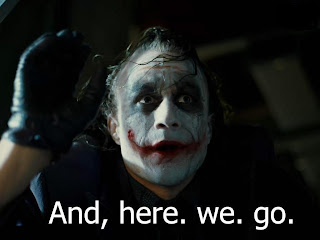 Posted by The Writer at 7:45 PM No comments: