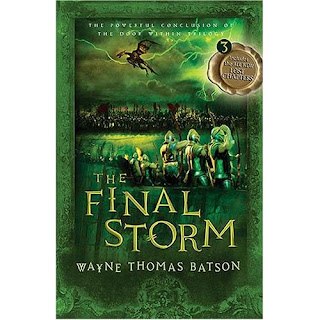 It's hard to look back and see who Aidan Thomas was not long ago: a boy distraught about moving, overweight, unhappy. Now, he is one of those few who have been called to save Alleble, and the Realm, from the forces of Paragor. Antoinette Reed was a normal girl who lived a normal life, not quite fitting in. She too, is in the Realm-- now trapped by Robby Pierson's Glimpse-twin, Kearn at the Gate of Despair. Robby himself was a sports star, the ultimate "cool kid". Now, his future is in doubt.

It's time for the final storm.

Paragor has unleashed the legendary Wyrm Lord upon the Realm, whose fires are deadly in the extreme. Other forces are at his command as well, and Alleble and its allied kingdoms are suffering crushing blows. The future is uncertain, to say the least. It seems Paragor even has a prophecy that predicts Alleble's downfall. And yet, the war goes on. When it seems there is no hope left, Paragory and Alleble prepare for the last battle, which will leave an impact on the Realm forever.

This is the greatest and most emotional of the Door Within Trilogy. The characters do what the characters would do. The danger is more intense than ever. There are moments to make the reader cheer, and moments to make them cry, all executed pitch-perfect by Wayne Thomas Batson. You care intensely about what's happening at the moment. There is great fulfilling of foreshadowing, great moments from all the characters. This is the sort of book that makes you want to give the author a round of applause after you've finished.

"The Rise of the Wyrm Lord" review 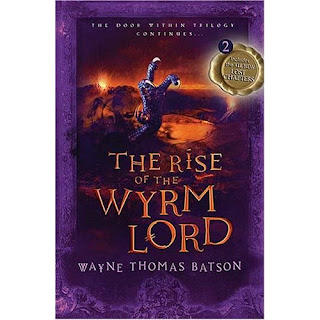 The Door Within was the first novel by Wayne Thomas Batson, and the first in his trilogy of the same name. It told the somewhat allegorical, but never preachy, story of Aidan Thomas, who was whisked to the Realm not long ago after finding a set of incredible scrolls that told its history. Upon leaving, successfully completing his mission and simultaneously saving his father and his father's Glimpse-twin, he saw his best friend, Robby Pierson, had red eyes. This meant he was a servant of the dark lord Paragor.

Now, Aidan is beginning to settle back into his normal lifestyle. One day, though, he meets a girl named Antoinette Reed, a magnificent artist, a skilled fighter, and a firm believer in Alleble and its king, Eliam. He realizes her Glimpse-twin is Gwenne, his love from the Realm. Suddenly, Antoinette is called just as Aidan was in the first book to go to Alleble as the Twelfth Knight, in a desperate attempt to stop Paragor from unleashing his greatest horror yet upon the Realm: the Wyrm Lord, an ancient dragon of evil.

Congratulations are in order for Mr. Batson, as his second book far surpasses his first-- and the first was good. The characters are more fleshed out, including the villains, the perils seem more real, and his writing style is better as well. Be prepared for a surprise cliffhanger ending, though-- you'll want to have Book III, The Final Storm on hand.
Posted by The Writer at 6:24 PM No comments:

"The Door Within" review 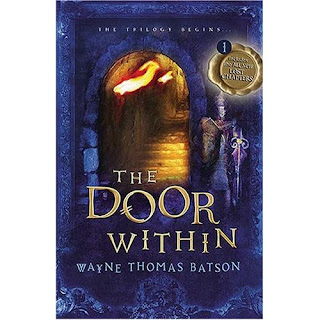 I've posted on this book before, but seeing as there's a new book out by this author, Isle of Swords, I figured I'd do more substantial reviews for his past books.

The Door Within is a compelling fantasy novel by a Christian author who's getting bigger by the day: Wayne Thomas Batson. In it, he tells the story of Aidan Thomas, a teenage boy whose life has just turned upside-down. No, he hasn't found out he's king of the trolls or something ludicrous like that. No, he has instead moved hundreds of miles away from his old home and his best friend, Robby Pierson. He doesn't know anyone, and so has suffered a crushing emotional blow. In his new home he is living in with his grandfather, he decides to go searching through the house one day. That's when he finds the scrolls.

The scrolls contain the story of a magical kingdom called Alleble which exists parallel to our own world. Alleble is part of the Realm, where King Eliam reigns in peace. But one of his trusted men, Paragal, betrays him and murders him in front of his people. His name is then changed to Paragor, and he and his servant, Rucifel, go to make a kingdom in his own image: Paragory. But in Alleble, Eliam's influence is still strong, and his spirit still abides in his kingdom.

Aidan is stunned, and rightfully so. These stories, he feels, are true, although his parents say otherwise. Angry, he shuts himself away from them and sees the scrolls have more written on them. There is a poem, a riddle, and with the help of his grandfather, Grampin, Aidan figures it out. He then finds himself in the Realm where it seems he has a mission waiting for him. He is the twelfth in a group of Glimpse knights. (Glimpses are the "humans" of the Realm. They each have a twin on Earth, and each is affected by the other. Their eyes change from blue- servants of Eliam- to red- servants of Paragor- to green- undecided- depending on where their loyalties lie.) In this group are characters such as Captain Valithor, Grampin's Glimpse, and Gwenne, whom Aidan takes a liking to instantly. And he journeys to win over the Glimpses of the neighboring kingdom for Eliam.

There isn't a slow moment in this story, and for this I'm grateful. Only occasionally does the story show the trappings of a first-time author. Wayne Thomas Batson certainly has talent, and he uses it to create a whopping good yarn, one that makes one wish to instantly progress onto Book II, The Rise of the Wyrm Lord.
Posted by The Writer at 4:03 PM No comments: