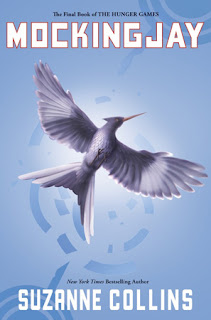 I'm writing this after taking only a few minutes to collect my thoughts on what is probably the biggest YA release of the past few years. Mockingjay brings to a close the events Suzanne Collins began in The Hunger Games and Catching Fire. By the way, before I launch in to review this book, which will undoubtedly be absurdly polarizing for its fans (how many times have I used that word this month?), I'd like to point out that there will be spoilers for the first couple of books. Unavoidable, I'm afraid, but you should really have read them by now. Go ahead. They're quick reads. You can finish the whole trilogy in a week without a problem.
Here we go.
Katniss Everdeen has survived the Hunger Games, not once, but twice, and is being torn every which way. She is in the mysterious District 13, the face of a full-scale revolution going on all across Panem. But it's not that simple. Can she really trust District 13? Can she trust Gale? Can she trust anyone?
That's all I'm willing to say, because what makes this novel so great is that it is full of twists. Suzanne Collins has deftly woven the plot to make it look like the entire trilogy was heading a certain direction, then masterfully switched its course. The Hunger Games, and their close-up violence is gone, replaced with a solid, moving war novel. A warning: this series veers more towards the "Adult" side of the YA market, and it goes some dark places that will rattle even older readers. Older meaning adults.
This isn't a perfect, polished story, but that's not what Collins wanted to write. Instead, she has given us a true war novel, delving into the psychological aspects of warfare and not being afraid to showcase some of the innocent lives lost on the sidelines. This is a book full of political manipulation, gray areas, and tough choices. (Speaking of choices, there is a certain one all the female readers are clamoring for. Don't worry, it gets answered, in perhaps the only way that it could.)
Because this isn't a perfect story, it isn't about tying up all the loose ends with a pretty bow. Actions have consequences, and war has repercussions. Anyone who's read Collins's excellent Underland Chronicles (starting with Gregor the Overlander) will know this is one of the themes she stresses. I'm pleased to say she handles it even better here than she did there, providing a truly strong conclusion.
There are a lot of people out there who will hate the ending. And I understand where they're coming from. Certainly it's not what any of us expected. But it's true to the characters and the spirit of the previous two volumes, as well as the confused narrator of Katniss, whose voice Collins absolutely nails. This story has a bite to it, yes, but it provides a bittersweet end to what will surely be remembered as a highlight of YA fiction.
My rating: 10/10
Coming Soon: More stuff. Eventually, after it comes out, The Way of Kings. But it doesn't come out till the 31st, so there might be something else in between.
Posted by The Writer at 8:43 PM

I really enjoyed this book. It is for sure not what I was expecting. I was looking for more with Capitol and cultural, and got a lot more Katniss and deep into Katniss being a wreck. Or I should say a disaster area. But I enjoyed the book very much.

Glad you enjoyed it so much!