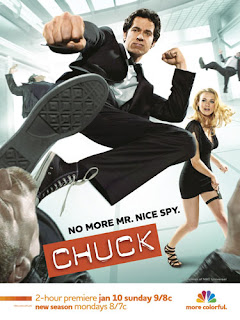 It's time for a new season of television to begin! That means it's time for me to stop being lazy and post some reviews for TV! I'll start with a show whose fourth season has its premiere tomorrow night: the imcomparable, unstoppable Chuck.
Chuck has survived being an on-the-bubble show for three seasons, and it's remained delightful the whole time. Season 3 was no change to the formula, while bringing major changes to the formula. How is this possible? Only in the nonsensical and addictive world of everybody's favorite Nerd Herder.
Chuck Bartowski has gotten an upgrade, downloading the Intersect 2.0 in his head in a last-ditch attempt to save his friends. It worked, and now he knows kung fu. The new Intersect allows Chuck to "flash" on skills as well as information. In other words, he can play the guitar on sight as part of a cover in a Mexican restaurant or perform feats of impressive acrobatic ability to retrieve a case for the CIA. But there are some problems with the new Chuck. Namely, the Intersect doesn't work when Chuck's emotions are in flux. And with Sarah around, that's a bit of a problem.
I know there was a lot of negative fan reaction to the series around Episodes 7 and 8, which slowed the romantic progression of a couple of characters down considerably. Looking back, it's not nearly as big a deal as the raving fanboys made it out to be, and the episodes are still fun on their own. Besides, this season had 2 finales (originally, Season 3 was given a 13-episode run, and by the time NBC extended it to 19, the 13th episode had been written), as well as the first major villain for Chuck to fight on his own. In addition to this, there are some great twists, and the finales aren't afraid to give the audiences some gut-punches.
One thing I liked about this season that I know a lot of people hated was the slightly darker tone. We're talking slightly here. There were still some hilarious gags, but the characters were dynamic enough that some of the darker moments of development hit hard. Personally, I'm glad that Chuck has changed a lot from where he started in Season 1, and while I doubt the darkness will be anywhere near as present in Season 4, I think this was a necessary step.
Now that that's said and done, here are my favorite episodes:
Chuck vs. First Class: Chuck goes on his first solo mission. On a plane to Paris, he finds out that his mission is sitting right next to him, in the form of Ring operative Stone Cold Steve Austin. Honestly, how do you top that? I'll tell you: fencing in the cargo hold of the plane.
Chuck vs. the Beard: Chuck's secret is getting a tad less secret, and when Ring operatives infiltrate Castle via the Buy More, Chuck is going to need some emotional help to flash. Also of note: the Buy More revolution is one of the best, most hilarious things I've ever seen on the show.
Chuck vs. the Other Guy: Chuck/Sarah shippers, your glorious moment has come! Seriously, though, the original Season 3 finale is full of great twists and character development, including a huge step in Chuck's character.
Chuck vs. the Honeymooners: Chuck and Sarah are thinking about quitting the spy life together on a train in Europe. However, they end up having to go behind each other's backs and then work together in a fantastically coreographed fight to solve one last case.
Chuck vs. the Subway: The first part of the 2-part finale is an earth-shattering one. Everything starts to fall apart. A recurring character is killed. Chuck goes to prison, and is in danger of losing his sanity. All in all, a great preparation for...
Chuck vs. the Ring, Part II: The finale. A bit of espionage work, a daring rescue, a massive twist, and a fight between two human Intersects with a Jeffster music video playing in the background. If this episode were a drink, it's be called Liquid Awesome.
So there you have it. I'll be tuning in tomorrow to see how this incredibly fun show continues for what could, unless ratings improve, be its final season. The antics of the lovable Nerd Herder may not always be new on TV, but they'll certainly be in my DVD collection, between LOST and Firefly, where I can relive the humor and action whenever I want.
My rating: 9.5/10
Posted by The Writer at 1:08 PM