It's time to spotlight a gaping hole in my reading: I've never experienced a Dean Koontz book. Never. I love a good thriller, but I for some reason haven't gotten around to him. Well, that needed to change. I decided to read two books by him, back to back. The books were selected at random (probably not smart), and read quickly, as per the norm with thrillers. My two-book experiment consisted of Relentless and Velocity.
While these titles sound related, they really aren't. The first is about an author who is pursued to point of near-insanity by an inhuman reviewer (which seems like a chance for Koontz to make himself feel better). The second is about a bartender who keeps getting notes with deadly choices for him, along the lines of, "Who would you rather die?" See, two very different books. Now let's get specific. 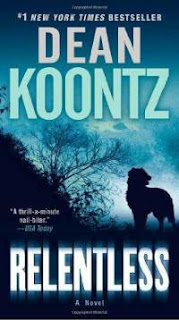 Relentless: This one is the more recent (and worse written) of the two. Now, I haven't read nearly enough to call myself an expert on Koontz, but I'm going to assume the style is a bit different from his usual thrillers. In Relentless, Koontz strives to keep things more tongue-in-cheek. The overall effect, however, is jarring considering the situations the characters find themselves in. Half the time, he seems to want us to take things seriously, be concerned for it all, and the other half of the time, he seems to be laughing at himself. In this volume, I'm not sure which works better, because the story is far-fetched enough to warrant many a raised eyebrow.
There are also too many things that are just weird for the sake of being weird. The genius I'm-not-Charles-Wallace-from-A-Wrinkle-in-Time-I swear kid, who makes something bizarre...because Koontz wills it. Then there's the certifiably insane in-laws, who have an underground booby-trapped lair in case of Armageddon that they really enjoy spending time in. I think they're supposed to be endearing, but it comes off as forced.

And yet... at the same time, I couldn't stop reading. Koontz's writing was fluent enough that I was able to get through all the rough spots and still have a decent time. Decent enough that I tried something more up his alley.
My rating: 6.5/10 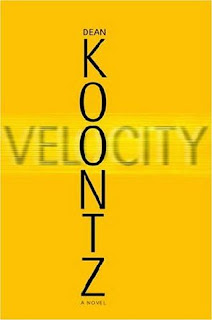 Velocity: Now there's why this guy is so popular. Interesting moral dilemmas, dangerous situations, tense moments, and a anil-biting roller coaster ride all around. The protagonist is more normal this time around (except for the violent and traumatic backstory, which seems so far to be a Koontz staple), and his descent into paranoia and the gray areas of morality are extremely compelling and vivid. I couldn't put the book down, and I didn't want to.
There is a negative, though. The end, where the true villain is revealed, seems to exist for the sole purpose of being unexpected. The motivation seems beyond forced, and I was glad when the scene ended.
But the ride getting there was intense and awesome. I'll definitely be reading Dean Koontz again, just maybe not the most recent Dean Koontz.
My rating: 9/10
Coming Soon: The Way of Kings and more backlog reviews.
Posted by The Writer at 10:26 AM