"The Way of Shadows" review 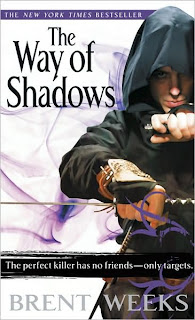 The perfect killer has no friends, only targets.

Brent Weeks is a brand new voice in the world of fantasy. By brand new, I mean, he just appeared October of 2008. His first book, The Way of Shadows, kicks off his Night Angel trilogy, published in three consecutive months (October-December 2008). With a combination of coupons, I was able to get the price of a new copy of this book down to $1.07. Due to the quality of the story, I'd have to say it's one of the best deals I've ever made for a book. The best being a copy of A Game of Thrones in first edition, first printing hardcover I found at a used books store for $6. But that's beside the point.
Weeks' story starts with Azoth, a boy living on the streets who wants nothing more than money and the security it provides. And when he becomes apprenticed to the wetboy Durzo Blint, money won't be a problem anymore. Neither will living on the streets.
By the way, a wetboy is to an assassin what a puma is to a tabby. And Blint is to a wetboy what-- well, you get the idea.
But Azoth, now under the identity of Kylar Stern, can't hide from his past. It's catching up to him in more ways than one. If he doesn't do something that even he finds horrible, he, along with everyone he loves, will die.
I'm not going to give this a very long review. I'll still say a few things, though. Weeks has pulled out all the stops in a gritty, dark, and yet, still enjoyable, ride. He has said himself the darkest part of the series is at the beginning, and even the titles suggest that. We move from The Way of Shadows to Shadow's Edge to Beyond the Shadows. Weeks is a great writer, and I can't wait to see him improve. The plot moves at a reckless pace, and the book is impossible to put down. The action, which takes up a large part of the book, is fluid and gripping, but the characters are still fleshed out. Azoth/Kylar is one of the best protagonists in new fiction I've read in a long time, conflicted in every way, but still striving for the best. And the fact that the characters still show a little light at times is comforting among the Joe Abercrombie novels. (Don't get me wrong, I loved The Blade Itself, but I wouldn't want to ever meet any of the characters. Or get within a mile of them.) All in all, and outatanding debut, and one of the best I have read in recent memory. Bravo.
My rating: 10/10
Coming Soon: Founding Brothers (I really have to read this now. I've been putting it off for far too long, reading only bits and pieces. I've got to finish it.)
Posted by The Writer at 8:40 AM

Wow...Great Review! I'm so looking forward to this now!!! Thanks!

By the way, I have a cool award for you over on my blog...LOL! Also, it looks like "Catching Fire" is winning! Woot! Woot!